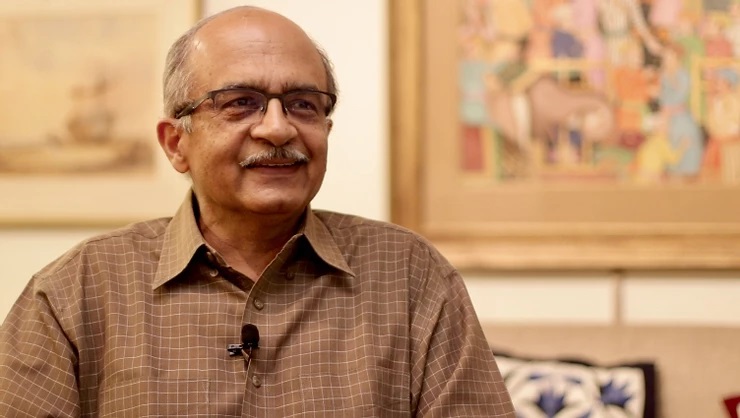 Prashant Bhushan: An insight into the Life of renowned Advocate-Activist

An insight to the daring, unapologetic and inspiring life of advocate-activist Prashant Bhushan

Prashant Bhushan, a PIL (public interest litigation) lawyer in the Supreme Court of India, is often termed as the “guardian of democracy”. He gained mass attention when he accused eight out of the sixteen Chief Justices of India of corruption. He is also known for being a member of the faction of IAC movement, i.e., India Against Corruption. Bhushan also played a major role in helping Anna Team form the AAP Party.

Born in 1956 in Allahabad, and oldest of the four children of Kumud Bhushan and Shanti Bhushan, he was always drawn to public activism. His father, Shanti Bhushan, 95, is a former Union Law Minister and lawyer-activist. Following his father’s footsteps, Prashant Bhushan briefly attended Princeton University and IIT Madras, however, he gained his degree in law from Allahabad University. Mr. Prashant Bhushan is also quite popular for his book, The Case that Shook India, based on Indira Gandhi’s election in 1974.

Influenced by his father, Prashant Bhushan was drawn to public activism from a very young age. His areas of interest lie in environmental protection, human rights and accountability of public servants. In addition to this, Prashant Bhushan is associated with numerous organisations like Transparency International, PUCL (People’s Union for Civil Liberties), CPIL (Centre for Public Interest Litigation) and Working Committee of the Campaign for Judicial Accountability and Judicial Reforms.

So far in his career, Bhushan has taken up approximately 500 cases dealing with good causes. According to him, he spends about 25 per cent of his time on paid cases. Prashant Bhushan also criticizes other lawyers who take up “amoral” cases.

In 2009, Bhushan represented activist Shubhash Chandra Agrawal asking High court and Supreme Court judges to be brought under RTI to declare their assets and post on the court websites. In the same year, Prashant Bhushan also made allegations on Chief Justices, stating that almost half of the sixteen judges were corrupt. Following the accusations, Harish Salve filed a contempt case against Bhushan in 2010. Bhushan was asked for a public apology by the Supreme Court.

Bhushan later went on to write another book, Bofors, the selling of a nation which was focused on the Bofors scandal. Prashant Bhushan also represented CPIL’s petition to remove Neera Yadav from office as the Chief Secretary of Uttar Pradesh on the charges of corruption. The case became the first in which an Indian Administrative Service officer was convicted of corruption.

Prashant Bhushan has also criticized the violence against the Naxal insurgents. Soon after the 2010 Maoist attack in Dantewada, he stated that such retaliation was expected as the govt. had declared the anti-naxal operations.

Digvijaya Singh falsely claimed that the Bhushans had failed to pay taxes when they purchased an investment property in Allahabad. However, Prashant Bhushan denied the charges stating that it was an attempt to affront members of the civil society in the Lokpal drafting committee with allegations.

At a press conference in Banaras, in 2011, Bhushan stated that he wanted to revoke the Armed Forces Special Powers Act in Jammu Kashmir. Prashant Bhushan wanted the government to persuade the people of Kashmir to align with India. For these remarks, he was attacked by the member of Bhagat Singh Kranti Sena. Many activists as well as politicians condemned the attack while Bhushan described his attackers of having a fascist mindset. He, despite of the backlash, stood by his statement. Bhushan also stands strictly against the death penalty. He spoke against the hanging of Ajmal Kasab as well.

Despite of fighting for the true revival of the democracy, Bhushan has also been a man of truth. Prashant Bhushan has, time and again, proved it during several interviews. One of them was when he said that Arun Mishra was in many ways regarded as the worst Supreme Court judge ever. According to him, Justice RM Lodha is the strongest CJI till date. Prashant Bhushan has also stated that he regrets not closely monitoring the traits of Arvind Kejriwal. Bhushan said that Kejriwal’s dictatorial attitude without consulting anyone and using any means to achieve his goals were the traits that he should’ve watched out for while supporting AAP in the initial stage. Prashant Bhushan is also of the view that at least 15,000 Gram Nyayalayas should’ve been set up by now.

On being asked where and how does Prashant Bhushan see the Supreme Court in 2024, Bhushan said that he was unsure of it reflecting on the fact that things are not looking good at present. He, however, hopes that the judicial system would improve. Prashant Bhushan is also a movie buff and an avid reader with The Social Dilemma being his latest favourite movie and How Democracies Die by Steven Levitsky and Daniel Ziblatt being his latest read.