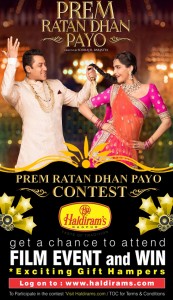 Haldiram, in collaboration with Prem Ratan Dhan Payo, is presenting Prem Ratan Dhan Payo Contest. The contest is based on a few simple questions that one needs to answer. The ones who will be lucky to win will get a chance to attend the film event and are also promised exciting gift hampers and discount coupons from Haldiram’s.

The spokesperson for Haldiram’s Nagpur said, “The contest is kept very simple so that maximum number of people can ensure their participation. It has already started and we are receiving so many entries. The number of responses also speaks for the interest people have in Salman Khan and his movies. He is a real star.”

It is after 16 years that Salman Khan is teaming up with Sooraj Barjatya for an Indian family drama film Prem Ratan Dhan Payo. The movie is being produced by Rajshri Productions. Salman’s co-star in the movie will be Sonam Kapoor.

Prem Ratan Dhan Payo’s music has been composed by Himesh Reshammiya and the movie features 10 songs. This is going to be the fourth time that Salman Khan would be seen as “Prem” in a film under the banner of Rajshri Productions.