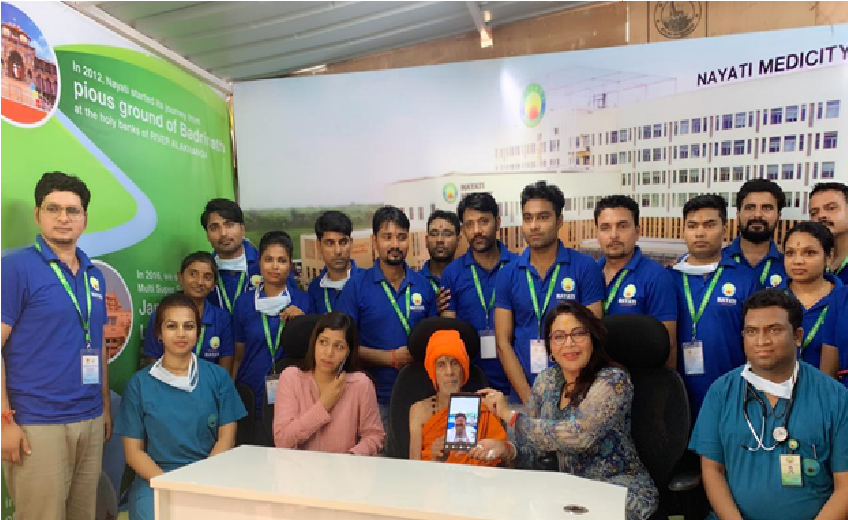 Patients coming to the Arogya Mandir by Nayati Healthcare, established in association with the Shri Kashi Vishwanath Temple Trust, will now be able to receive the services of eminent doctors of the country through telemedicine. The technology will now enable patients to receive the services of senior and experienced doctors from Nayati Medicity Mathura, Whims Nayati Delhi and Nayati Hospital Agra.

To inaugurate the telemedicine service, Shri Vishwesh Tirtha Swami Ji of Pejawar Math was present at the Arogya Mandir. Swami Ji said, “I have known Niira (Radia) for the past several years, and I have seen her closely while working in the society. In 2012, she took the noble initiative to provide health services to the people from Badrinath Dham. I am very impressed by it.”

Swami Ji added, “God is very kind to Niira, due to which she got an opportunity to work at places of religious interest, be it Badrinath Dham, Mathura or Kashi Vishwanath Dham. I am confident that Nayati Healthcare will reach other Tier 2 and Tier 3 cities of the country and provide world class medical facilities to the needy people.”
Vishal Singh, CEO of Shri Kashi Vishwanath Temple Trust, said, “Revolutionary steps are being taken in the field of health in our country, and the introduction of telemedicine service at Aarogya Mandir is a great step in this direction. I congratulate the entire team for this initiative.”

Nayati Healthcare Chairperson Niira Radia said, “I am thankful to Lord Badri Vishal for this opportunity of serving pilgrims visiting Shri Kashi Vishwanath Dham. We started Arogya Mandir in Baba Vishwanath’s city of Kashi just 3 weeks ago, and so far more than 4,000 patients have come to Arogya Dham for their treatment, of which 70 percent were locals. We came to know that many patients were brought in a very serious condition, who needed the advice of specialist doctors immediately. It is this that led us to connect the patients coming to Arogya Mandir with specialists through telemedicine.”

Under the telemedicine program, the report of the patients coming to Arogya Mandir for treatment will be uploaded on the system, after which the patients will be able to talk to the concerned specialist directly through video conferencing, and get the necessary advice.