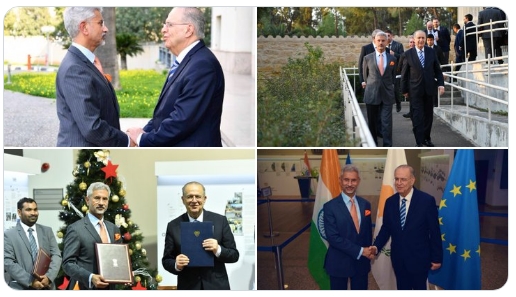 India and Cyprus have signed an agreement on defence and military cooperation and a letter of intent for a migration partnership. The agreements were signed during a visit by Indian Foreign Minister S. Jaishankar to Nicosia, the capital of Cyprus.

The defence and military cooperation agreement aims to strengthen the existing relationship between the two countries in the field of defence and military training. It will also facilitate the exchange of information and expertise, as well as joint exercises and other activities.

The letter of intent for a migration partnership seeks to enhance cooperation between India and Cyprus on issues related to migration and mobility. This includes the exchange of best practices and the development of policies to address common challenges in the area of migration.

The agreements were signed in the presence of President Nicos Anastasiades of Cyprus and Prime Minister Narendra Modi of India. Both leaders welcomed the signing of the agreements. Stating they would further strengthen the already close relationship between the two countries.

In a joint statement, the leaders emphasized the importance of deepening cooperation in various fields. This includes defence and security, as well as economic and cultural ties. They also noted the need for greater collaboration on regional and international issues, including counterterrorism and the fight against extremism.

The visit by the Indian Foreign Minister to Cyprus comes at a time when the two countries are looking to expand their strategic partnership. In recent years, India has been seeking to strengthen its relations with countries in the Mediterranean and Eastern Europe, and Cyprus has emerged as an important partner in this regard.

The signing of the defence and military cooperation agreement and the letter of intent for a migration partnership is a significant step forward in the relationship between India and Cyprus. It is expected to lead to greater cooperation and collaboration between the two countries. It will also help to strengthen their strategic partnership further.

In addition to the defence and military cooperation agreement and the letter of intent for a migration partnership, India and Cyprus have also signed many other agreements in recent years. These include a double taxation avoidance agreement, a cultural exchange program, and a memorandum of understanding on cooperation in the field of tourism.

During his visit to Nicosia, Indian Foreign Minister S. Jaishankar also met with his Cypriot counterpart, Nikos Christodoulides, to discuss various issues of mutual interest. The two leaders reaffirmed their countries’ strong and longstanding relationship and expressed their commitment to further deepening and strengthening this partnership.

Both India and Cyprus are members of the Commonwealth of Nations and the Non-Aligned Movement and have a history of close cooperation on a range of regional and international issues. These agreements are expected to enhance this cooperation further and contribute to the growth and development of both countries.