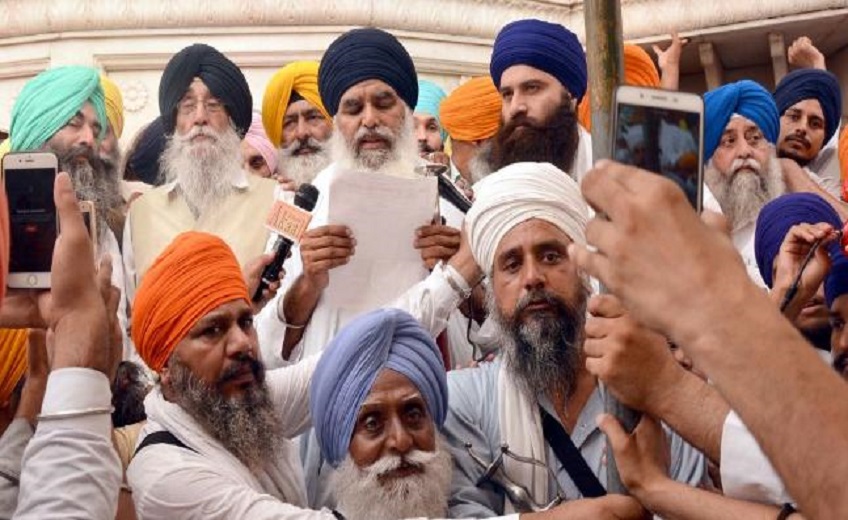 “This is a complete secessionist movement. We want India to break up. We want Naxals to be free, Dravidistan to be free, we want Maoists to be free; because our enemy is the same, our enemy is Delhi, our enemy is the Brahmins,” Shamsher Singh, a Khalistani terrorist, can be seen saying to one Shawan Sen, an investigative journalist for the Republic TV news channel during a sting operation. Expressing further, his dogma and the agenda clearly comes to picture when he says, “Brahminism as an ideology, is the enemy of all people in India except for the Brahmins. It’s the unification of our goals which are lying here, we want Delhi to fall.”

From declaring Khalistan passport and currency, openly meeting Hafiz Saeed and affirming support for him to attack political leaders in India with the assistance of Pakistan’s Inter-Services Intelligence (ISI), the Khalistani forces are designing a false Referendum 2020 mural to help them succeed in their agendas. Talking about the assistance they are getting from across the world, the alleged forces that have declared freedom of Punjab as their only motto, are now defining a route through international aid, creating a scenario which needs immediate attention.

Pitching their ideas to countries that share their goals, the movement has now garnered support from China and Pakistan. In what can be called as a backdoor war, the not-so-friendly neighbours have shaken hands with the Khalistani forces showcasing their demand for disruption. At times as critical like this, the presence of a legitimate Khalistan office in China’s capital – Beijing, indicates the psychology that is driving this campaign.

Paramjit Singh Pamma, who is the main accused of Air India Flight 182 bombings in 1982, while talking about Chinese involvement revealed in the sting operation, “Yes, we have got very good response…”

Another Khalistani terrorist, Shamsher Singh, who is also a common link between extremist groups Babbar Khalsa and Dal Khalsa, highly spoke about the 2,700 Indian officials of various ranks that have been killed by Khalistani terrorists. He further said, “Armed struggle is the only way to destabilizing India. Operating for the last 30 years, assassinating Indian government officials and attacking military bases, Khalistanis have a hit list of all these like Saini and Alam,” clearly defining the monstrous plans running through the so called ‘peaceful’ and ‘legal’ campaign. One wonders if this is the actual show running behind curtains in the so called Referendum 2020 for Punjab?

Furthermore, Canada’s decision to remove the term ‘Sikh Extremism’ from their 2018 report on terrorist threats while constantly claiming to be a neutral party raises multiple questions about the Liberal government’s intentions. Another example of lacking strict mechanism is the presence of active Dal Khalsa members in the United Kingdom, even though it has been declared as a terrorist group. A name change was all it did to escape legal action.

While Pakistan also, has officially denied Sikhs for Justice to campaign for Khalistan on their soil, the event of Khalistani activists assaulting Akali Dal leader, Manjit Singh GK on August 25, 2018 in California, USA, and the praises that followed from the right hand man of Hafiz Saeed, again invoke mixed feelings about its true intentions.

The accord of peaceful and healthy relations proposed by the United Nations, for the betterment of the world, has been targeted time and again. The Khalistan agenda, which evidently aims at upsetting the harmony in India and the world, is another example that needs worldwide governments to act strictly and, in time. With no room for error, it is obligatory that stern measures be taken right now, to avoid consequences that will ultimately fetch complications for the peace seeking modern world.