Taxes are quintessential for any country to survive. The payment of tax is beneficial as it plays a pivotal role in the development of the nation, upliftment of the society, and more.

While Indian superstars like Akshay Kumar and Rajinikanth have been announced to be among the highest taxpayers in the entertainment industry in 2022, we have brought you the top taxpayers in South Asia in the recent years.

From Nepal’s Billionaire Binod Chaudhary to India’s Mukesh Ambani, we have brought you some interesting names of the highest taxpayers from Asia who have contributed immensely for the development of their countries in recent years. 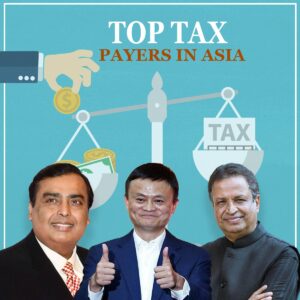 The Mukesh Ambani-controlled Reliance Industries Ltd (RIL) has been among the highest tax-paying corporate in India. It contributed Rs. 1.51 lakh cr to the National Exchequer in FY 2019-20.

At the RIL AGM 2021, Business tycoon Mukesh Ambani said that “Reliance continues to be India’s highest payer of customs and excise duty in the private sector with payments of Rs 21,044 crore. It is among the highest payers of GST and VAT at Rs 85,306 crore.

It is also among the highest payers of income tax in private sector, paying Rs 3,213 crore.”

In the previous Annual General Meetings, it was concluded that Mukesh Ambani’s RIL became the highest payer of GST and paid over Rs 67,000 crore.

The Chairman of multi-billion conglomerate CG Corp Global popularly called Chaudhary Group has paid taxes for 1000s of crores in the last few years. According to spotlight Nepal, in 2017, the Nepal-headquartered company Chaudhary Group paid 788 crores and motivated all the taxpayers of the Himalayan nation for their contribution to the national economy.

Despite frequent lockdowns and pandemic-related downturns, the Group’s contribution to the Government of Nepal’s Exchequer grew by a whopping 45.79%. This was at a time when most of the businesses in Nepal were struggling.

The Chaudhary Group which contributed almost 1.73% of the Nation’s taxes witnessed unprecedented growth in various parameters of tax contribution to Govt of Nepal’s revenues.

For example, the Group companies paid NPR 4948 lakhs in income tax alone which was 120 % more than the previous financial year. Its Excise Duty contribution rose by 49.5% to NPR 56047 lakh whilst VAT contributions grew by 43% to NPR 40133 lakhs. Customs Duty contribution alone grew by 25% to NPR 14926 lakhs.

Furthermore, he is also renowned for charitable activities and transforming lives in Nepal via Chaudhary Foundation.

In recent years, the name that has emerged among the top taxpayers in Asia is Jack Ma, who founded China’s e-commerce giant Alibaba and paid a total of around $3.41 billion in taxes in the year 2016.

Furthermore, Li Qiang, governor of Zhejiang province also mentioned that Alibaba Group made a huge contribution to tax revenues by contributing around 30 million yuan on an average per day..

Prominent businessman and social activist of Bangladesh Md. Kaus Miah paid over Tk 448.34 million income tax to the public exchequer in the FY 2020-21. 90-year-old Hakimpuri Jarda owner was voted among the best taxpayers in the businessmen category for his outstanding contribution to the revenue sector.

Furthermore, Kaus Miah has also been involved in various social activities and seen as a pioneer in country’s social responsibility activities.

In recent years several countries across the globe made changes to their statutory corporate income tax rates. The countries that increased the corporate taxes were Bangladesh, Argentina, and Gibraltar, however, countries like Chile, Tunisia, and France reduced their corporate tax rates.