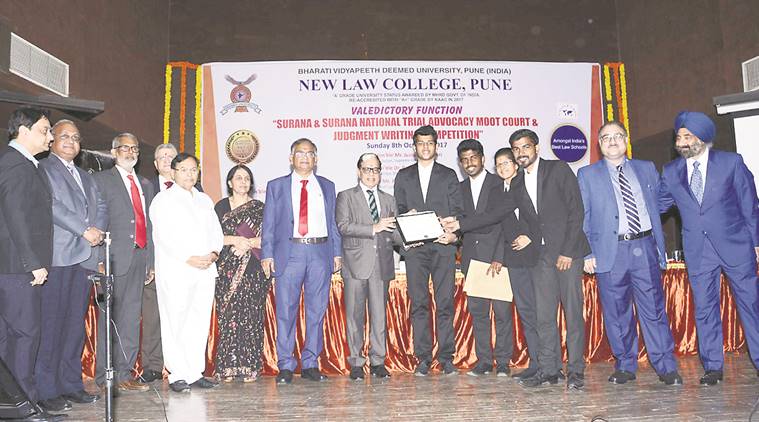 Bharati Vidyapeeth Deemed University’s New Law College, Pune recently organized the ‘Surana and Surana National Trial Advocacy Moot Court Competition and National Judgment Writing Competition’. The event was graced by various eminent personalities who enlightened the audience with their views. Justice A K Sikri, Justice Dinesh Maheshwari, Dr Patangrao Kadam, chancellor, Bharati Vidyapeeth Deemed University, Professor Mukund Sarda, dean & principal, BVDU, New Law College, Pune, Professor Dr M M Salunkhe, vice-chancellor, Bharati Vidyapeeth Deemed University, were some of the the dignitaries who were present.
The Moot Court and Judgment Writing competitions held at New Law College, Pune witnessed an active participation from various law institutes. The School of Excellence in Law, Chennai, was declared the winner of the competition, with Symbiosis Law School, Pune being the runner up. Vijaya Krishnan RP was honored ‘Best Speaker Award’ and Maharashtra National Law University, Nagpur, bagged the ‘Best Memorial’ prize.
Emphasizing that hard work is the key to becoming a champion lawyer, the Supreme Court Judge, Justice A K Sikri said, “Lawyers should not mislead the courts.” He further added, “All are champions. They should know their hidden skills.”
According to him, “To become a good quality lawyer, he or she should have good knowledge of the law, command over the language, along with oratory skills and presentation of the case.” Justice Sikri believes that in courts, honesty is certainly the key to success.
“A lawyer should not mislead the courts and has to create goodwill of himself.” he said, adding that there were three stages in the profession of a lawyer: “Work with no money, work with money, and less work more money.”
Justice Sikri further reinstated the fact, “Earlier, law was the last resort, but now it has become a passion. Legal profession is becoming charming. Moot courts play a very important role in developing the skills of the students.”
Also present at the event, Justice Dinesh Maheshwari expressed him views eloquently on the subject of law. “Practicing law in a trial court is the backbone of the judiciary in India. Legacy is important in law education,” he said.