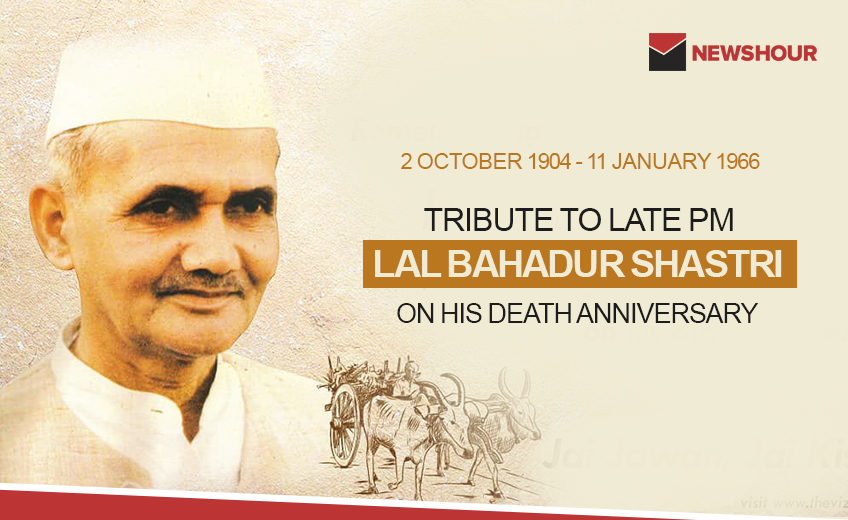 Lal Bahadur Shastri “Shrivastav” dedicated 45 years of his life for India’s independence followed by its leadership as he became the country’s third Prime Minister. During his four-year tenure, Lal Bahadur Shastri laid the foundation stones for Green Revolution (agriculture) and the White Revolution (Milk) that continue to satiate the food needs of India to date. His graduation in Philosophy from Dr. Bhagwandas at Kashi Vidyapeeth earned him the title “Shastri” – meaning scholar.

Lal Bahadur Shastri (October 2, 1904 – January 11, 1966) was born in Ram Nagar, Ahmedabad, Gujarat to Sharada Shrivastav Prasad and Ramdulari Devi. In 1906, Shastri’s father died due to the bubonic plague. After this, Shastri spent the first ten years with his grandfather Hazari Lal and then, moved to Varanasi for education. After a speech by MK Gandhi in 1921, Shastri quit school barely months before his 10th standard examinations to join the Non-Cooperation Movement (NCM).

Lal Bahadur Shastri was always fond of reading and looked up to Bal Gangadhar Tilak. This shaped his political ideologies including socialism and nationalism. Interestingly, he renounced “Shrivastav” from his name, signifying his stance against the caste system.

In early days, Shastri had pledged his lifetime allegiance to Gandhi and faced arrest for the first time during NCM. Although he was left as a minor, this rid him of fear from jail – something Gandhi emphasized for all Indians. Three years after his marriage to Lalita Devi in 1927, Lal Bahadur Shastri dedicated himself to the freedom struggle under Gandhi. From 1930 to 1947, he was jailed for approximately 9 years in total.

Shastri went to jail multiple times for various reasons including his participation in Salt March, supporting freedom movement through Satyagraha and strategizing freedom fighters from Nehru’s home town. However, during jail time, he read excessively about western revolutionaries and philosophers in order to understand their strategies, global political diaspora, and international stances of countries.

Under Nehru’s leadership post-independence, Lal Bahadur Shastri served in different leadership capacities. In 1951, he was the General Secretary of the All-India Congress Committee and got nominated to Rajya Sabha in the same year. Afterwards, he became the Minister of Railways and Transport for five years. Shastri resigned from the office while citing responsibility for a train accident and although Nehru accepted it, he spoke highly of Shastri’s character in public. In Nehru’s next term, Shastri served as the Minister for Transport and Communications and Minister of Commerce and Industry before becoming the Home Minister in 1961.

After Nehru’s death in 1964, then Congress Party President K Kamaraj selected Lal Bahadur Shastri as the 3rd Prime Minster and trusted him to build upon Nehru’s legacy.

Pakistan conflict of 1965 was the landmark moment of Lal Bahadur Shastri’s office tenure. Armed Pakistani personnel entered Jammu and Kashmir as an aggressive move of the country’s claim over half of the Kutch region. This is when Shastri gave birth to the slogan – “Jai Jawaan Jai Kisaan”.

Shastri maintained his stance of responding to force with force against Pakistan and when the arch-rivals decided to wage a war, Shastri gave it back to them. Unleashing the wrath of the Indian army, the brave soldiers fought their way through tanks and rifles as they breached international borders near Lahore. Even the Chinese tried to rattle Shastri with a war threat, but his nationalism echoed the same and the foreign entity didn’t interfere.

Shastri’s character is best reflected in the lines he uttered in a broadcast, one-day after the official UN ceasefire to the 1965 Indo-Pak War. He said, “Peaceful coexistence is possible among nations no matter how deep the differences between them, how far apart they are in their political and economic systems, no matter how intense the issues that divide them.”

After the official ceasefire, Shastri went to sign the Tashkent Declaration (peace agreement) with Pakistan President Muhammad Ayub Khan. One day after signing the agreement, Shastri was declared dead due to a heart attack.

However, Shastri’s wife and some supporters claimed foul play due to blue marks on the deceased’s body. Even today, officials continue to maintain their silence and opacity about Shastri’s postmortem as well as other details of his death. It remains an unsolved mystery.

Here is a list of achievements and awards that keep Lal Bahadur Shastri’s legacy alive:-