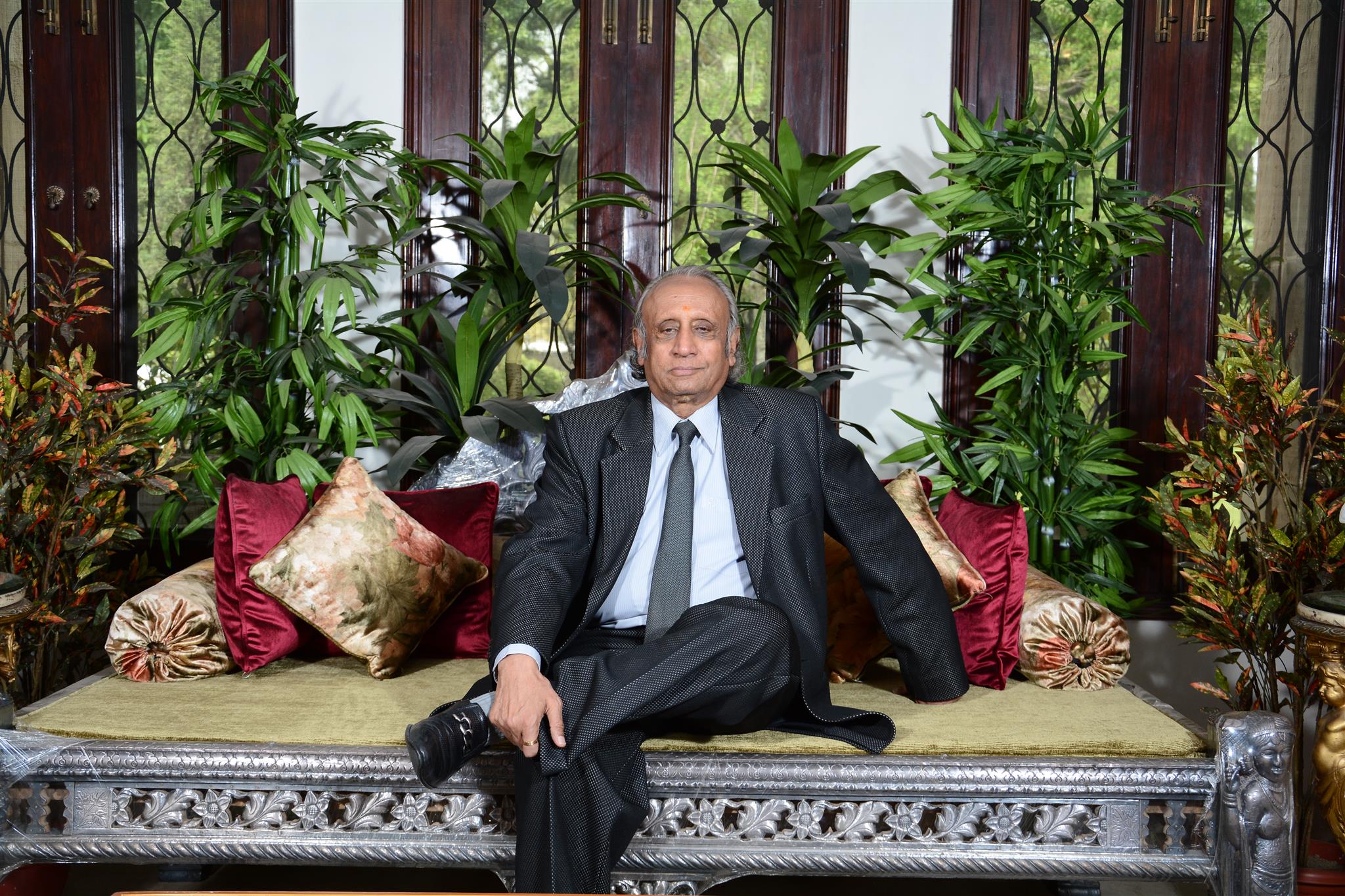 The best way to learn is through leadership, and there’s no better example of this than Sanjay Dalmia, the 74-year-old Chairman of the Dalmia Group of Companies. The septuagenarian takes us through his journey, business mantras and what he feels our economy needs the most.

The best way to learn is through leadership, and there’s no better example of this than Sanjay Dalmia, the 74-year-old chairman of Dalmia Group of Companies.

Under the aegis of Sanjay Dalmia, the group has seen immense growth, as he constantly prepares it to face the dynamic, technologically driven world ahead. The septuagenarian takes us through his journey, business TO COMMEMORATE 5o YEARS OF INDIA’S INDEPENDENCE, in 1997; the Parliament had invited the Speaker of UK’s House of Commons to address a session. One MP, however, objected to the idea. “How can a representative from a country responsible for the mass loot and massacre of our country celebrate freedom from the atrocities they committed?” he thundered. Several fellow MPs seconded him, and ultimately the British Speaker was only permitted to be present on the dais, but not address the session. The MP in question was Sanjay Dalmia. Patriotism is what drives Dalmia’s mission and vision.Apart from his business interests, he is involved in several social and economic causes. His journey of success and enterprise has helped our economy in more ways than one, while also inspire budding entrepreneurs till today.

Dalmia was born in Lahore on 17 March, 1944, when it was a part of British India. With roots in Chirawa, a town in the Jhunjhunu district of Rajasthan, his large, joint family had been in business for several years, ever since brothers Ram Krishna and Jaidayal Dalmia (Sanjay Dalmia is Jaidayal Dalmia’s grandson) started a conglomerate in eastern India, in the first half of the loth century. Later, brothers Ram Krishna and Jaidayal were to join hands with Shanti Prasad Jain of the Sahu Jain family to form the mam-moth Dalmia-Jain Group. When he was still very young, Sanjay Dalmia’s family moved from Lahore to Delhi, where he was admitted to the premier Modern School. The formation of a newly liberated India in 1947 instilled the seeds of progress and freedom of thought in Sanjay, who often took part in debates, seminars and conferences, on subjects ranging from politics to economy.

After Modern School, Sanjay Dalmia proceeded to St Stephen’s College, where he graduated with Economics (Hons). In 1965, he joined the family business, in Odisha (then Orissa), which traced its origin to the Dalmia-Jain Group. Sanjay Dalmia explains, “In 1948, the two families decided to split the businesses. The Dalmia businesses were further divided between Ram Krishna and Jaidayal. Today, a number of companies and conglomerates trace their origin to the original Dalmia businesses. These include Dalmia Bros, Dalmia Bharat Group, Orissa Cement, Renaissance Group and their subsidiaries.” As a budding industrialist, Sanjay Dalmia developed interest for banking, finance, taxation and applicability of industrial developments to the Indian environment. “Within a year [of joining the family business], I took charge of the cement product division with PCC poles for electrification and spun pipes for sanitation,” he reminisces. Under his leadership, the PCC division bagged a tender of the Bihar electricity board, which was the first of-its-kind achievement for the family. After his stint in the cement products division, Sanjay Dalmia moved to Rampur, Uttar Pradesh, and assumed charge of the family’s distillery business, which supplied industrial alcohol to the army. However, as the family wasn’t keen on this business, the Dalmias sold it.

The textiles division, on the other hand, is involved in spinning of fibre (yarn), weaving, dyeing and printing of sheets and duvets, which, besides being sold in Indian markets, are exported world-wide. The division, located in Tamil Nadu, has seen its revenue base grow from approximately US$ 5o million to around US$615 million in 18 months. The company has also expanded into consumer products such as edible and industrial-grade salts, as well as honey.

The Dalmia Group’s other companies include Bharat Ex-plosives Ltd, Caretel Infotech Ltd and Golden Tobacco Ltd. Bharat Explosives specialises in industrial- and military-grade explosives and fuels, while Caretel Infotech Ltd is involved in business process outsourcing. Golden Tobacco Ltd, of which Dalmia was the chairman till February 2014, manufactures cigarettes. These apart, Dalmia claims expertise in several other industries, including IT, telecommunications, finance and investment, concept marketing and holiday resorts, etc. He has even been on the board (of directors) of the Union Bank of India and a member of the Northern Committee of Industrial Development Bank of India.

Besides business, Dalmia is keenly interested in India’s overall industrial and economic growth. He is associated with trade organisations such as the PHD Chamber of Commerce and Industry, FICCI and is also the founder-director of the Europe-India Chamber of Commerce (EICC).

“I think it is important to discuss deliberate, debate and even lobby for the economic development and growth of a nation. It is with this belief that I have founded EICC, and it is for this that I never lose an opportunity to talk at forums such as CII and FICCI,” he says.

Headquartered in Brussels, EICC works towards fostering trade, commerce and investment between India and Europe. Dalmia feels that there is so much that India can gain from Europe. “Europe is the heart of global culture, and some of the world’s oldest democracies have emerged from its nations. The continent is also the hub of fair trade practices and socio-economic growth. I think India, as the most ancient culture, and Europe, as the finest example of development, can benefit from each other immensely,” he says. And, of course, he’s a former member of the Rajya Sabha, where, besides raising several relevant issues in the fields of finance and economy, he has moved a private members’ bill, pressing for the rechristening of Andaman and Nicobar Islands to `Shaheed and Swaraj Islands’, as a token of honour for Subhash Chandra Bose and other free-dom fighters.

Dalmia is actively involved in social causes too. He runs Masoom, a school for special children from economically challenged backgrounds. “Since the inception of Masoom, I’ve been celebrating every birthday with these kids,” he beams. Then there’s the Dalmia Sewa Trust, whose activities include providing safe drinking water to the populace of Chirawa and organising free health camps in Rajasthan for underprivileged people suffering from asthma and eye ailments. The trust has also been involved in constructing lavatories in around 100 houses in Chirawa and building homes for about 100 homeless families in the town. All these projects function with the trust’s own re-sources, without any aid from the government or outside agencies. Dalmia’s patriotic fervour is also evident from his foundation of the Bharat Maa Shaheed Samman Trust, which honours freedom fighters who died for the country and provides financial support to the dependants of freedom fighters. The Trust is also in the process of filing a petition in the British High Court for compensation against the atrocities and crimes committed by the British in India, on the lines of Kenya’s Mau Mau victims, who, on winning their case against the British, were directed compensation upon the court’s orders. Further, it organises the Bharat Maa Gaurav Sandhya, a musical programme themed on patriotic songs, in various parts of India.

On the domestic front

“I’m an early riser,” says Dalmia. “In the morning, I do yoga, read newspapers to keep myself updated with the happenings around the world, I plan my business meetings and discuss company growth.” Dalmia considers his wife, Indu, as his biggest support. Though the couple don’t have children of their own, they are very attached to Dalmia’s brother’s children. “I always tell the kids to follow my vision and their hearts and be determined. However, it’s not regimented. I leave it up to them, what they wish to imbibe and practise.” When it comes to leisure, he loves travelling, especially to places with mountains and greenery, the Black Forest range being his favourite.

Blueprint for the future

“I want to regain the same legacy of the group as it was in 1940,” says Dalmia. “And my vision is to get off the beaten track and create institutions through risk, vision and initiative, which will influence not only the immediate community but also the country at large.” Asked about his personal attributes that have contributed to his growth, he says, “I believe one should have faith in oneself and a positive attitude towards life. In a world of advanced globalisation and technological volatility, it becomes imperative to enhance your skill sets. It is the key to boosting efficiency and quality of labour to ensure productivity and economic growth.” Dalmia also expresses his fascination for investing in various start-ups, as investing in them is like investing in the future of India. India, he concludes on an optimistic note, is blessed with ample entrepreneurial skills and enough talent to run enterprises all over the world.

I think it is important to discuss, deliberate, debate and even lobby for the economic development and growth of a nation. It is with this belief I have founded EICC!