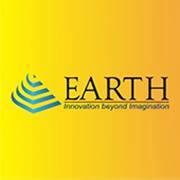 Earth Infrastructures Ltd bags the ‘World’s Greatest Brands & Leaders 2015- Asia and GCC’ Award in the Real estate category. It is a prestigious award which is regarded as the biggest multi-industry research-based project. It has recognized the company as one of the most renowned brands across Asia. 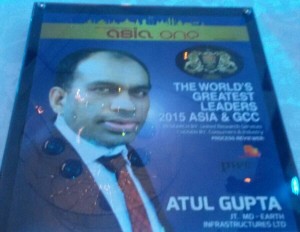 ‘The World’s Greatest Brands & Leaders 2015 – Asia & GCC’ was a two-day summit which felicitated 150 Brands from across 16 industries & 12 countries of Asia & Arabia, and 100 Leaders from Business.The event was organized by the Indo-UAE Business Summit 2015, in association with IBPC-Dubai -India Business. It was held at Jumeirah Emirates Tower Hotel Dubai UAE in December 2015. The nomination and selection process was based on the research results provided by United Research Services. The entire process was reviewed by PricewaterhouseCoopers and the winners were chosen by consumers and industry experts. The leaders and brands which got selected will be featured in Print, Portal and Broadcast formats across Asia.Various renowned brands like Tata Tiscon, LIC, Bajaj Allianz, UAE Exchange, JK Cement, Airtel, Taj Hotels, ICICI Bank, Infosys, ITC, Jindal Steel & Power, ISB Hyderabad, and Emirates Airlines were nominated along with Earth Infrastructure ltd.

On being nominated and receiving the acceptance letter, the official spokesperson for Earth Infrastructures said, “It is a great moment of pride for the company to be nominated for ‘World’s Greatest Brands & Leaders 2015- Asia and GCC’ Award. The nomination has been earned after years of dedication and commitment to deliver consumers with nothing but the best in terms of quality and comfort.”