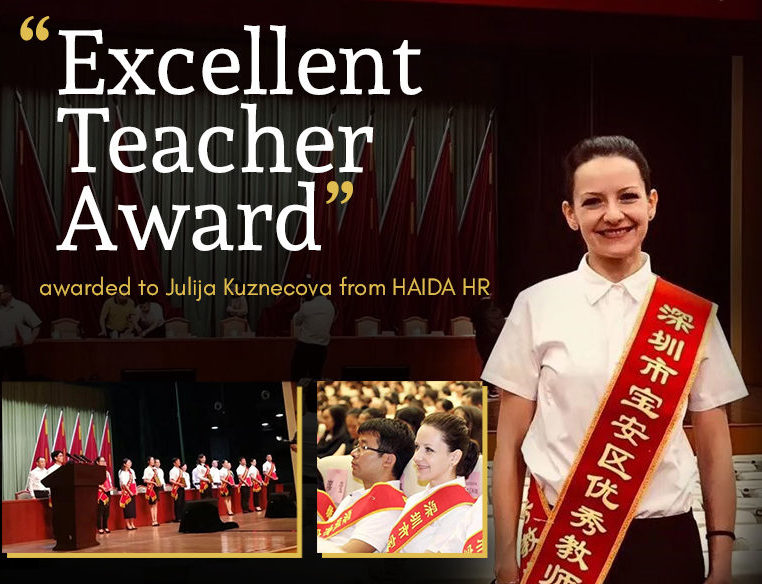 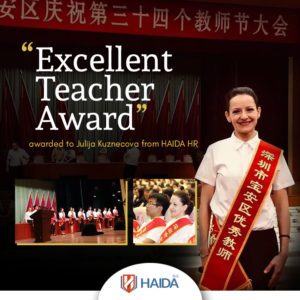 China celebrated its 34th Teachers’ Day on September 10, 2018, with great enthusiasm. Taking the celebrations a step further, Bao’an Education Bureau organized a ceremony to felicitate the best schools and the excellent teachers.

However, the cynosure of all attention at the event was Julija Kuznecova, a teacher with Haida HR China. Kuznecova was honored with ‘Excellent Teacher’ Award by Bao’an Education Bureau. The Haida HR teacher was the only foreign educator at the event to have received the award.

Julija Kuznecova has been working with Haida HR China, also known as Haida Interact International Company Ltd, for more than 2 years now. Apart from teaching in a high school in Bao’an, Kuznecova is also a trainer for the company.

According to Haida HR officials, Julija has trained over 300 new foreign teachers during the past year for all districts in Shenzhen. “She treats all her students and trainees equally and she contributes all her time in planning the best for her classes and trainings,” said a Haida HR official, on her win.

A Hangzhou-based recruitment and training company in China, Haida HR is known for its unique work model – that of hiring foreign teachers to teach in Chinese schools. In turn, the company takes full care of the teachers it hires. This includes assistance in visa applications, insurance, residential permits, and various over-the-head formalities.

Haida HR also provides foreign teachers with free accommodation, along with a plethora of other perks like a comprehensive medical and accident insurance, reimbursed residence permit, obligatory medical checkup, and airfare allowance.

Another USP that Haida HR holds as an employee-centric recruitment agency is its free of cost TEFL training for foreign trainee teachers. The TEFL training for this year was conducted by Geoffrey West, the Director of Training and Development, Haida Interact International, making it the first time someone from higher management being involved so closely with the course.

Foreign teachers like Julija Kuznecova are the product of the right amount of motivation and care they receive while working with Haida HR in China.