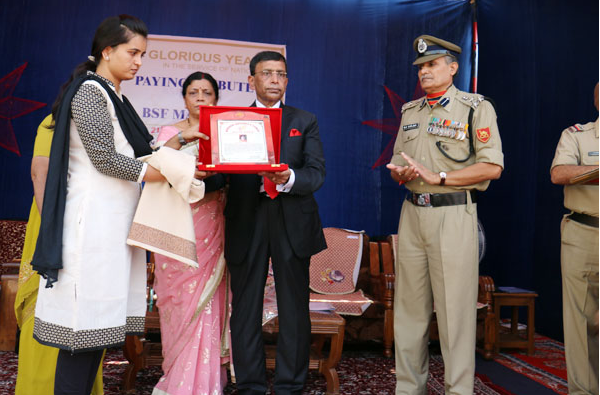 Homage paid by Nims Chairman to the families of Martyrs 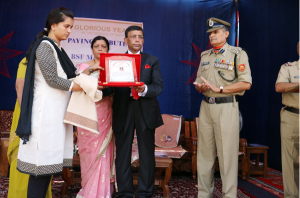 The families of martyrs were honored and felicitated by the Border Security Force at their 50th anniversary celebration. The event was held at the headquarters of Border Security Force in Jaipur on 21st October 2015. Prof. (Dr.) Balbir Singh Tomar, Nims Chairman was the Chief Guest and Dr. Shobha Tomar, Managing Director of Nims University was the guest of honor. They paid homage to the martyrs and felicitated their families as a mark of respect.

Paying tribute to the martyrs, Nims Chairman; Prof. Balbir Singh Tomar in his speech at the event said, “I congratulate the Border Security Force for completing its 50 years. With more than 2 lakh 5 thousand battalions, the Border Security Force is among the strongest units of India. It has established benchmarks of success and bravery. It is only due to the efforts of such forces at our border that we feel safe at our homes. They risk their lives selflessly for our safety. What they do for us can never be repaid and measured. We just cannot thank them enough for their great and noble services.

It is a great step taken by Border Security Force to acknowledge the selfless efforts of these martyrs and felicitating their families. It is a proud and emotional moment for all of us. These brave soldiers have set examples of bravery and valor for the youth of our nation. We deeply respect the audacity and courage of the families to dedicate their loved ones to the safety of nation. Heartfelt salute to the proud parents.”

Appreciating the aim of the event in his welcome note, Deputy Inspector General PSO shri N.K.Gurjar said, “This is the first one of its kind event organized by Border Security Force.”

News India also paid tribute to the families of martyrs and said, “It is a great initiative taken by BSF. Although by felicitating we cannot meet out the loss which they are going through but by paying tribute we can equally participate in their patriotism.”

Nims Chairman invited as the chief guest at IAFS 2015

Navratri celebration at NIMS with a 3-day program