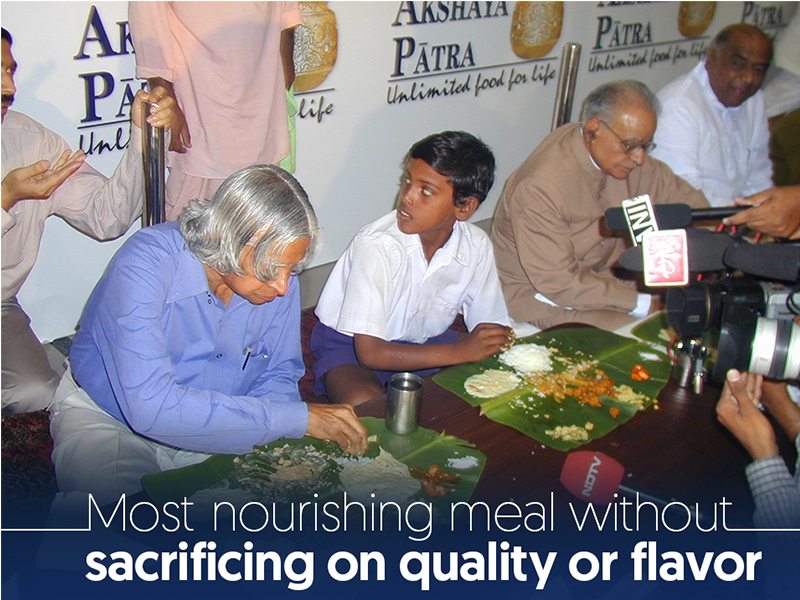 When the Missile Man Launched Love in the Akshaya Patra family. 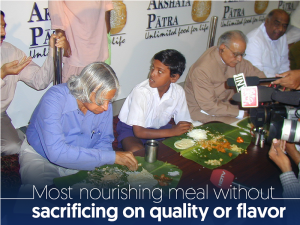 India is familiar to the brilliance of late Dr APJ Abdul Kalam. Akshaya Patra Foundation is blessed to have witnessed his illuminating personality back in 2003 when he served children freshly prepared and scrumptious food in a mid-day meal inauguration event.

As the President of India, Dr Kalam formally inaugurated Akshaya Patra in Bengaluru (then Bangalore) with Swami MadhuPandit Dasa. In his speech, the President said:   “When I entered the divine, beautiful temple, I turned to Swami MadhuPandit Dasa and appreciated his power to spread the message and particularly giving food under the Akshaya Patra program.”

The children lined up on the floor with banana leaves sprawled in front of them. Many of them gaped in awe as their role model held the bucket of savory rice that would be devoured in seconds, once served.  Smiles erupted on the face of the children once the revered ex-president started to dish out the rice and finger-licking sambar. Akshaya Patra meals had never been so full of vigor and glee. Dr. Kalam then sat down among the students to taste the magic of Akshaya Patra’s kitchen. He agreed that this mission was one-of-its-kind, where school children were provided with the most nourishing meal without sacrificing on quality or flavor.

Dr Kalam was an inspirational hero, who transformed India with his scientific innovation and presidential administration. It was a sad day for the Akshaya Patra Foundation family when the news of his sudden demise made headlines. Swami Madhu Pandit Dasa, in an interview, reacted to this unfortunate event:
“Dr APJ Abdul Kalam was one of India’s greatest treasures. Though he is no longer with us, we are left with his legacy that will shine bright for years to come.”

Akshaya Patra enthusiastically follows Dr Abdul Kalam’s vision of an educated and healthy India. Akshaya Patra received the Kalam Memorial Award on October 15, 2016, for their ‘Innovation in Governance’ as they successfully manage to feed more than 1 million children across various states of India.