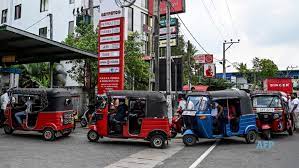 The economic situation in Sri Lanka has hit rock-bottom. Newly elected Prime Minister, Ranil Wickremesinghe, announced that the country is down to its last day of petrol. The irony is that just sitting off Sri Lanka’s coast, is a ship full of petrol.

Energy Minister, Kanchana Wijesekera, addressed the Parliament saying, “There is a petrol ship in our waters. We do not have the forex.” The island nation already owes $53 million for an earlier shipment of fuel and the country “hopes to release the ship today or tomorrow” according to him.

Prime Minister Wickremesinghe stated on Monday that the government was working tirelessly to secure dollars in the open market to pay for three other ships that are filled crude oil and furnace oil, and currently anchored in Sri Lankan waters.

The chronic shortage of foreign currency and inflation has resulted in severe shortage of medicines, fuel and other essentials. The Prime Minister also hinted that the country’s central bank would have to print money to pay government wages.

Wickremesinghe also hinted that talks were being held with the World Bank to channel part of the promised aid to pay for fuel imports. The World Bank has agreed to lend $600 million to Sri Lanka as it struggles to contain the spiraling economic crisis. India, playing the role of a big brother, has already committed $1.9 billion in aid, and may add an additional $1.5 billion to smoothen import purchases.

Sri Lanka’s fuel requirement for June is an estimated $530 million, which will undoubtedly put further strain on the government as it wrestles with a worsening economic crisis – the worst since the country’s independence in 1948.

While petrol seems to be in short supply, the country has sufficient stocks of diesel. The irony could not have been crueller.