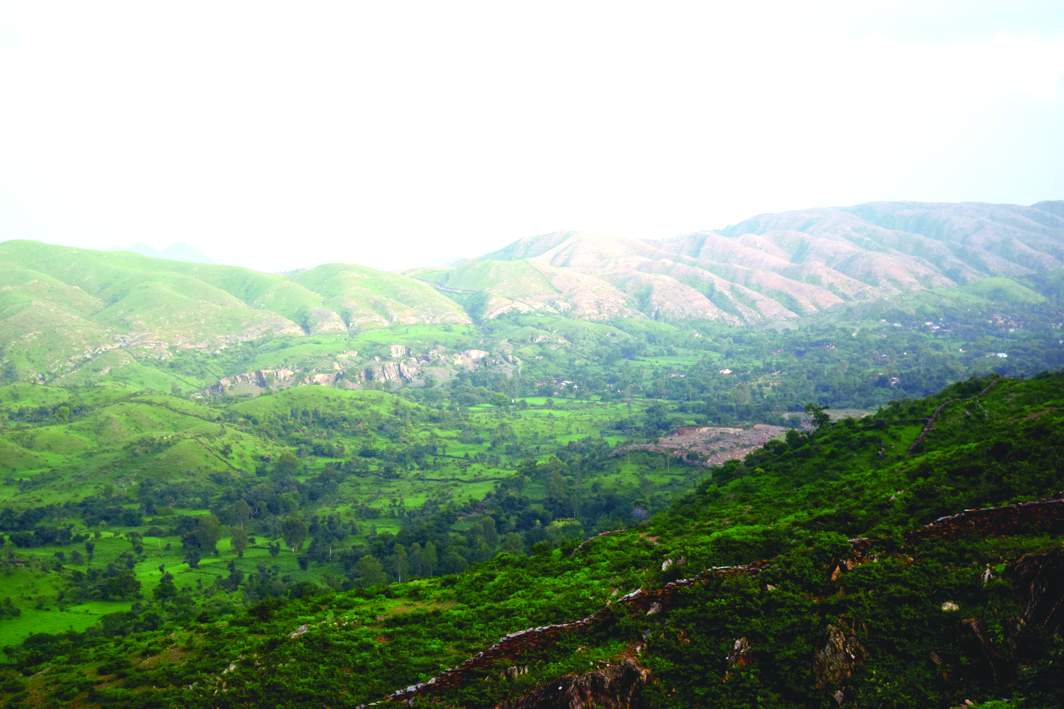 350 million years – The age of Aravalli range makes it elder to the Himalayas and one of the world’s oldest surviving geological features. however, not for long as it succumbs to human need and greed.

Aravalli range influences wind, water, and rains in the North-Western region of India and is known as ‘The Ridge’ since the British rule. Here is a geological overview of the plains, peaks, and forest encompassed in the range.

Aravalli range is spread across 692 km like a bell curve. It begins in Gujarat with small hills around Palanpur and begins to gain altitude as it proceeds. This leads to Guru Shikhar, the 1,722m high peak, in Mount Abu. High and medium peaks surround Udaipur, Rajasthan, and begin to descend at its lowest as they reach Delhi. The capital is practically situated upon Aravalli (Ridge Forest, old JNU Campus, Rashtrapati Bhavan) and its green cover can be observed in Faridabad, Gurugram, and other parts of Haryana, which marks its visible end. Geographically, Aravalli range extends below the earth’s surface to Haridwar. That’s why this range is one of the world’s oldest surviving geological features.

These lush-green covers are home to a variety of flora such as Babul, Katha, and Phulahi along with fauna including leopards, jackals, blackbuck, migratory birds, pelicans, etc. These are preserved largely across sanctuaries like Sariska, Asola Bhatti, Ranthambore, etc.

Aravalli range continues to be unfit for agriculture since its initial days as the land is extremely rich in quartz, sandstone, limestone, marble, etc. Particular mining regions including Bundelkhand, Udaipur, Bhilwara, Haryana, and some parts of Ajmer. However, according to the 2009 order from the Supreme Court, mining without respective state authority permission is liable for legal penalty and punishment.

The geographical presence of Aravalli creates a drainage divide between river Ganga and river Sindhu. Additionally, its forests are often referred to as the ‘green lungs’ for Delhi and Haryana. Tree covers play a significant role in restricting the entry of sands and dust generated from Rajasthan towards the plains of Ganga. Various parts of Haryana enjoy groundwater resources due to Aravalli’s presence in the state.

Alas! More than 1/4th of the Aravalli range has disappeared and it could entirely vanish within a few years. In its journey across ages, the magnitude of human atrocities on the range has sharply increased. It started with mining.

A land rich with valuable stones attracted mining projects. Excavation machinery and controlled demolitions executed large-scale projects that altered the topography as well as continuity of the range. On the contrary, mining provided jobs for the locals. The vicious cycle of development and valuable minerals in exchange of the range gave birth to illegal mining activities across Gujarat, Delhi, and Rajasthan.

In 2018, a report by Central Empowered Committee (CEC) stated that since 1967, 25 % Aravalli range disappeared in Rajasthan due to illegal mining. Furthermore, parts of Haryana faced termite prevalence due to mining. Result? They are, to date, forced to plant water-hungry crops that lead to the exploitation of available groundwater. South Haryana’s Aravalli range green cover continues to deteriorate as mass deforestation is carried out to clear land for real estate projects and development in Faridabad, Gurugam, and nearby areas.

Greed-driven continuous exploitation has prepared the death bed of the Aravalli range.

Will the Aravalli Range disappear?

Organizations and projects are underway to avoid the worst. Aravalli Bio-diversity Park is a flagship initiative proposed by IAmGurgaon (IAG), a non-government organization, in collaboration with renowned ecologist Vijay Dhasmana. Under this project, a 40-year old barren mining site has been converted into a green cover dominated by habitats of trees from all over the world.

Grasses, shrubs, and saplings were exclusively selected by Vijay and IAG’s team that suit the soil and environment. Simultaneously, an irrigation network was set up along with dedicated gardeners for its sustainability. The aim is to create a self-sustaining framework that provides living conditions for fruits, flowers, and animals.

However, these measures cannot be successful without stern action from state governments, judiciary, and police. It is imperative that the legal system maintains the system of checks and balances for corrupt government officials. This can be supported by the use of police and a series of laws that protect the region under the Aravalli range.

With the combined efforts of all the aforementioned entities, government and private, India certainly stands a chance to preserve its geographical pride for the upcoming generation.