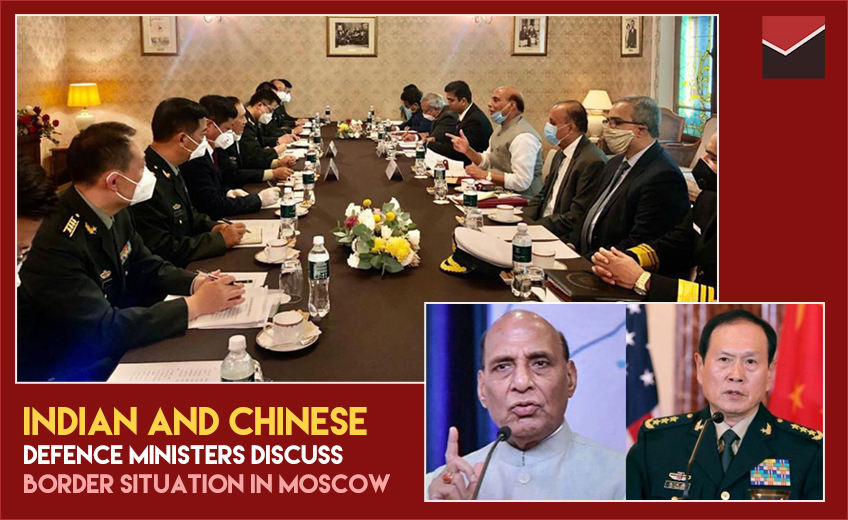 In the wake of increasing tensions on the LAC between Indian and Chinese forces, the Defence Minister of India, Mr Rajnath Singh and China’s Wei Fenghe on Friday held a two-hour-long meet in Moscow to discuss the situation on the LAC and ease the tension, stated government sources.

Since the first escalation of tensions on the border in early May, this was the first time that the two sides met in a high-level face-to-face meeting.

During the talks, Rajnath Singh insisted on restoring of the pre-April status quo in the Eastern Ladakh and disengagement of troops across the LAC, said the sources. It added that the Indian delegation also objected to the Chinese army’s new attempt to change the status quo in the Southern bank of Pangong Lake, while insisting on the peaceful resolution of the standoff.

“The focus of the talks between the two defence ministers was on ways to resolve the prolonged border standoff,” a source said. It further said that the meeting was requested by the Chinese defence minister. Indian defence Secretary Ajay Kumar and Indian Ambassador to Russia DB Venkatesh Varma were also a part of the main delegation.

Indian DM Rajnath Singh stressed on the need to maintain peace and security in the region, which he said is only possible through trust, non-aggression, peaceful resolution of differences and respect for international rules.

The tensions between the two sides have flared up in the past few months. At least 20 Indian army personnel were killed in Galwan Valley on June 15. Both the countries have added more troops to the region and the armies are on high alert in multiple places across the LAC.