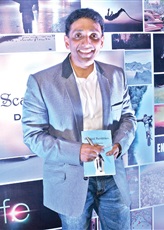 Running a Scalpel Through His Memories

The significance of Om mantra, bungee jumping and Chennai rains may have nothing in common. But now, there is one connecting link to the three unrelated topics, courtesy Dr J S Rajkumar’s book latest tome— Scalpel Scribbles. The surgeon from Lifeline Hospitals, who has authored various educational books, has now come up with his own collection of poems and short stories that focus on his ruminations and memories of real incidents. These include the 2004 Kumbakonam fire accident that claimed the lives of children, and a few other incidents.

“Moments from my life that were worth documenting, form this book. It all started when the Tsunami had struck the city and since then, I have been jotting down notes — some as poems and some as prose — on tissues, bits of papers I could find, during plane journeys or whenever I found time. There are close to 50 poems and short stories in the book. They more or less trace my mind’s map during these years. The stories and poems here are just half of those I had documented. The remaining would perhaps be released as another book,” said Dr Rajkumar at the launch of his book on Tuesday.

Poetry, which the author said are a dance of words, is his preferred way of expressing thoughts. Having read poet John Keats, who was also a medical doctor, further inspired him to use the form to express his thoughts. However, that did not go down well with a few publishers. “They had turned down the book, because they didn’t want poems. I had almost given up, when Covenant Media agreed to take up the offer,” he added.

While his memories were documented since 2004, it was not until 2011 that Rajkumar decided to make a collection of his memories. Following the flow, he however, did not decide what should be narrated in what format, until he began writing.

“I didn’t plan them, things just fell in place,” he said.

Rajkumar added that this book might open more avenues for him to write, apart from the text books.

“I will perhaps start writing my second book tonight, and it will be about the human side of my experiences with a few patients,” he said excitedly.