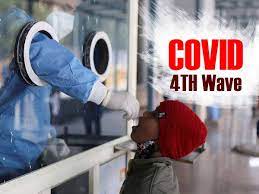 Just months after COVID cases in India saw a decline, the numbers are starting to swell again. In the week just ended (April 11-17), India recorded 6,610 fresh cases compared to the previous week’s count of 4,900.

The surge in cases comes on the back of rising infections in the three northern Indian states of Delhi, Haryana and Uttar Pradesh. Over the course of the week, COVID cases in these states rose by almost 35 per cent. Delhi reported 517 new cases on Sunday last. For comparison, the number of cases was 131 at the beginning of the month.

Although the rise is still very small at present, the trend has been continuing for four days now. Delhi’s current positivity rate is 4.21 per cent, and the recent spate of fresh cases has increased the total to 18,68,550 while the death toll remained unchanged at 26,160. However, the surge in cases has been restricted to these three states so far while the situation in rest of the country seems pretty calm.

Anurag Agarwal, former Director of Delhi-based Institute of Genetics and Integrative Biology (IGIB), stated that such trends are first evident in major urban centres like Delhi. He also noted that the spike in cases is consistent with what would happen if the mask mandate was done away with. Almost everything has been reopened in the city, with schools and businesses almost back to full capacity.

If the situation in Delhi is anything to go, other major cities will certainly see a surge in cases in the coming days. On a positive note, the spike is not a result of the emergence of a new variant of the COVID virus. As a majority of the population has already been vaccinated or infected with the Omicron variant, the numbers are not expected to go very high. As such, the rise is likely to be temporary, and manageable.

Nevertheless, one can never rule out the possibility of a fourth wave as the evolution of the virus is a random and an unpredictable event. If, and when, a fourth wave occurs, scientists expect it to be driven only by the emergence of a new COVID variant. As things stand, a fourth wave might be a little way off but as the preceding three waves have shown us, one can never be too careful.