While the world is keenly focused on Europe and the Russian-Ukrainian war, Russia’s East Naval command along with China’s People’s Liberation Navy have made an inconceivable historic move in the form of live naval drills near Japan in the East China Sea, alarming the Japanese who were not quite expecting Russia to take part in these exercise. The Russian Pacific Fleet will send vessels on long-range voyages to carry out exercises with their Chinese counterparts, according to China’s Ministry of National Defense. This exercise between two of the largest superpowers at present is the first of its kind, who have been developing closer bilateral ties lately after decades of waning ties due to ideological differences. 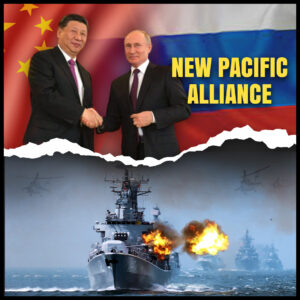 This move comes as both countries are attempting to assert themselves as regional powers, with China facing growing pressure over its territorial claims in the South China Sea and Russia flexing its muscles after a period of isolation following its “de-Nazification and liberation” of Ukraine.

This joint exercise by Russia and China is not only a direct challenge to the U.S. interests in Asia but also reflects an emerging competition for influence with the U.S., which is itself confronting new challenges in a multipolar world. America is weary of the combined strength of both Russia and China and knows for a fact that if left unchecked, it can create an imbalance that would strengthen the power of each country and set the stage for a new Cold War.

The U.S. is also deeply concerned about the security implications of a growing Chinese presence in the region, including its construction of artificial islands with military capabilities and its efforts to extend its influence throughout Southeast Asia. These developments are especially worrying as they coincide with an apparent Russian-Chinese rapprochement, which has heightened concerns that Moscow could use Beijing’s support to undermine U.S. interests in the Middle East, Europe and Asia-Pacific.

Now, it’s a game of waiting and watching as to how things unfold on both sides of the world. One side, where a “hot” war is rampaging Ukraine and the other side where a “cold” war is emerging. Will this live naval drill spark something and act like a catalyst or is it just “huff and puff” of the Russian and Chinese Navy?