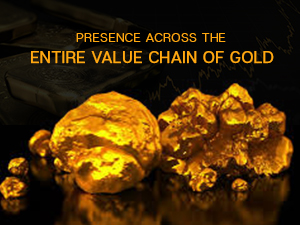 Bangalore-based Rajesh Exports is a leading gold regulator with almost 35% control of the global market.

Originally started out as a 500 sq ft in 1989, the company registered a consolidated turnover of FY16 at Rs 1,61,000 crore. Prashant Mehta, Rajesh Exports MD, expressed his vision of taking the company to a new level of recognition on a global scale, after the company featured in the 2016 list of Forbes 500.

Beginning from the initial step of production, Rajesh Exports has three plants for manufacturing purposes in Dubai, Bangalore and Cochin. This equips the company with a capacity of producing almost 400 tons of gold jewelry. Furthermore, the company is capable of refining 2,400 tons of yellow-metal on an annual basis.

Over a period of time, Rajesh Exports has expanded its business into multiple verticals involved in the gold industry. Their retail chain, Shubh Jewellers, has over 80 stores in Karnataka with future strategies aiming to mark their footprint at a global level. “We put a hold on our retail expansion as we had the opportunity to acquire Valcambi. Now that it is complete, we will focus on retail expansion through our Shubh Jewellers franchisee stores,” said Prashant Mehta, Rajesh Exports MD.

The acquisition of Valcambi was a pivotal step in the establishment of Rajesh Exports value chain. Valcambi is one of the world’s biggest metal refining companies based in Switzerland. After its acquisition, the cost of raw materials substantially decreased for Rajesh Exports. Consequently, the cost of jewelry sold by retailer branch of the company reduced in comparison to others. This made them strengthen their presence in the market.

On having the adequate resources for processes covering all aspects, from mining to retail, Rajesh Exports MD added, “Our prices are 5-6 per cent lower than other jewelers because we are a vertically integrated company and incur costs of 2.5-3 per cent while our competitors incur 11-12 per cent cost.” Maximizing the potential of their presence in every vertical, they introduced a ‘no making charges’ policy. This not only became a unique selling point of their products, but also helped them to gain customer trust.

With a progressive approach towards Indian as well as global expansion, Rajesh Exports continue to be the leader of the gold industry. It’s value for money gold and control of a fair share of market with stocks and sales has helped it retain its top slot.