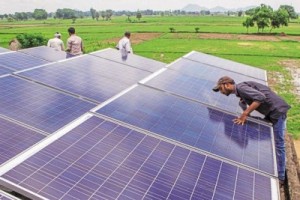 With the aim to make India a giant producer of solar energy, Hindustan Cleanenergy recently talked about swapping to feed-in-tariff mechanism, when it comes to establishing renewable energy projects across the Nation. According to the solar energy arm of Hindustan Powerprojects Pvt Ltd, the move will help in the immediate execution of the project and give reasonable returns to the stakeholders.

The CEO of Hindustan Cleanenergy, Rajya W Ghei told a concerned media authority, “The award process through competitive bidding is very time-consuming and full of uncertainties. To accelerate the implementation of solar projects, we would like the government of India and state governments to take the feed-in-tariff (FiT) route opted by countries like China, Germany and Japan.”

Indian states have acknowledged the significance of sustainable development and solar energy’s key role in it. That is the reason that all the state governments are introducing new guidelines and strategies to smooth out the solar projects’ implementation. Ghei mentioned that India has opened a surfeit of opportunities for companies in renewable energy sector, by modifying its renewable target upward by 5X.

The Chairman of Hindustan Powerprojects, Ratul Puri mentioned that he would be glad if state Government would take necessary steps in this direction work towards strengthening the power sector in India.

Ghei also mentioned that the Indian power generation sector needs sustained operations of the top players from breadth to length of the country, which will eventually help to reach the target of 40% energy consumption via renewable, by the year 2030. Ghei also mentioned that Hindustan Cleanenergy is planning to generate 2 GW solar power by 2017.

Ghei said, “With the continued focus of government and renewed interest in the sector, we feel confident towards achieving the targets. Over 8 GW capacity of solar projects are getting awarded over the next six months, hence, there are enough opportunities for us to deliver competitive projects like the one in Punjab.”