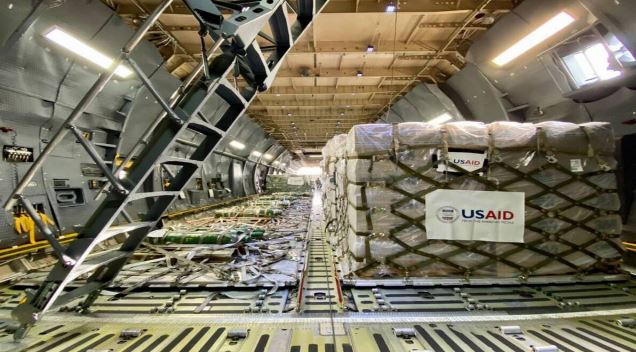 The first batch of emergency supplies from the United States reached India this morning even as the country struggles to get a grip on the unrestrained spread of COVID-19. The past week saw a daily addition of over 3 lakh cases which threatened to tear down the already-strained health infrastructure.

This morning saw a US military transport land at Delhi’s International airport with more than 400 oxygen cylinders, a million COVID-19 rapid test kits and other much-needed medical equipment on board.

US President Joe Biden stated that the US would support India in its fight against the deadly virus. He also tweeted that just as India had sent aid to the States during its critical period, the US would like to return the favour.

Ned Price, spokesperson for the State Department, said that the United States is “delivering supplies worth more than $100 million in the coming days to provide urgent relief to our partners in India.”

The US Embassy also shared pictures of the supplies and tweeted, “The first of several emergency COVID-19 relief shipments from the United States has arrived in India! Building on over 70 years of cooperation, the United States stands with India as we fight the COVID-19 pandemic together. #USIndiaDosti (sic).”

India now has the second highest COVID cases with 1.83 crore infections after the US which recorded over 3.22 crore cases so far. 2.04 lakh deaths have been reported so far in India and the death toll is expected to rise as it struggles to shake off the numbing blows of the second COVID wave.

Other nations have also queued up to send aid to India, with Russia, United Kingdom and even China among the notables. US officials also confirmed that special flights would continue to ferry in equipment and other medical kits donated by individuals and organisations.