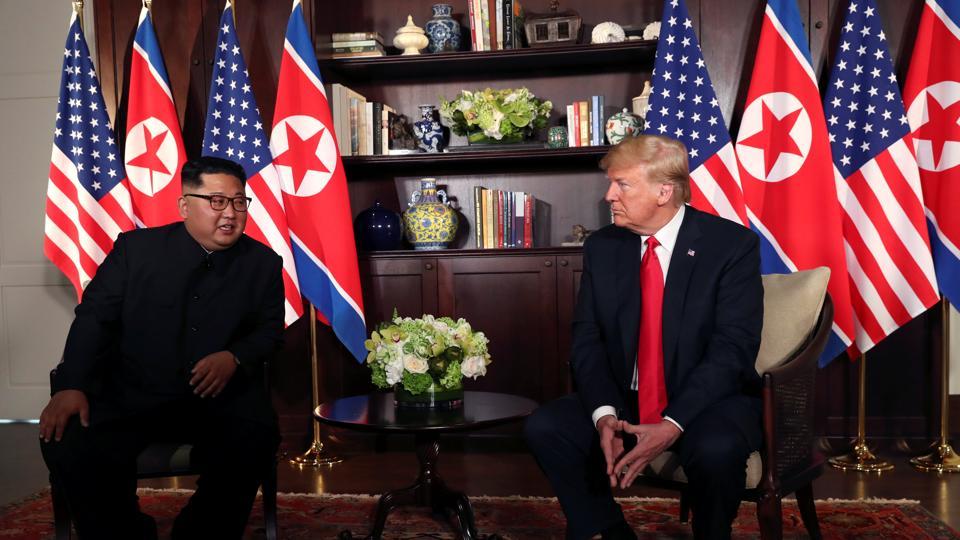 Donald Trump became the first US President to meet a North Korea leader today at the summit, which was held at a resort island in Singapore. The meeting comes after an unprecedented escalation of nuclear tension between the White House and Pyongyang. Many other countries like South Korea, Japan and China are also looking at the recent developments related to the relationship of the two nuclear nations.

The meeting of these leaders could bring lasting change to the security landscape of Northeast Asia, if they succeed in making a diplomatic breakthrough.

North Korean leader Kim Jong Un vowed to work with Trump despite of agreeing to the fact that there may be some challenges ahead. Against a background of North Korean and U.S. flags, both the leaders sat alongside each other. Both of them exhibited an initial atmosphere of bonhomie with cameras of the world’s press trained on them. Both men had looked serious as they got out of their limousines for the summit at the Capella hotel. However, they were seen smiling and holding each other by the arm later in the piece, before Trump guided Kim to the library where they held a meeting with only their interpreters.

On Saturday, Trump had said he would know within a minute of meeting with Kim whether he would reach a deal. Trump and Kim emerged walking side-by-side through the colonnaded hotel before entering the meeting room again, after some initial exchanges. Kim was heard telling Trump “I think the entire world is watching this moment. Many people in the world will think of this as a scene from a fantasy…science fiction movie.”

On the other hand, when asked by a reporter how the meeting was going, the US President said: “Very good. Very, very good. Good relationship.”

After the second round of the meeting, a joint statement is expected to be released by the 2 countries which may come with few more breakthroughs.

Slipping down the hill, gold at an all-time monthly low in 20 years