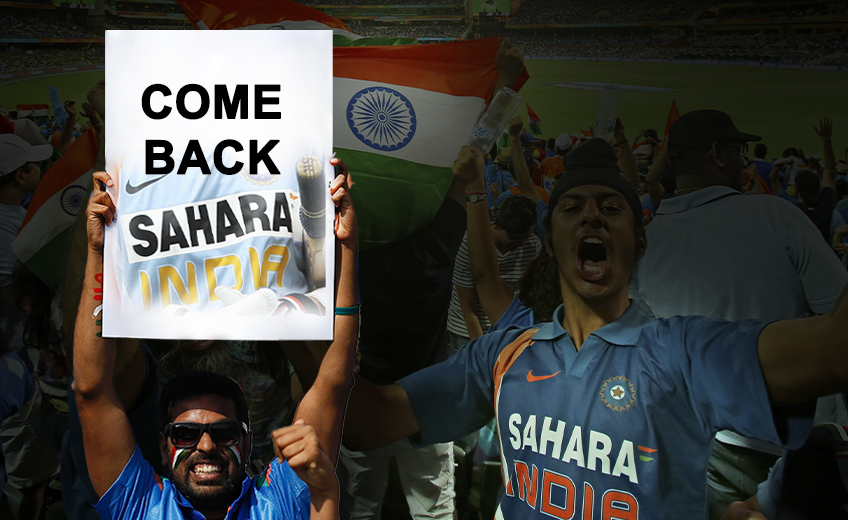 India’s defeat to New Zealand by eight wickets in the latest World Test Championship left the cricket fans in melancholy. It was a third defeat for the Indian cricket team captain Virat Kohli in knockouts and finals of ICC tournaments.

Now, India’s next appearance in an ICC tournament will be in the T20 World Cup 2021, which is scheduled to be played in India.

Considering the consecutive defeats by the team, Indian fans flooded Twitter and demanded to bring back the ‘Sahara India jersey’ by revoking the present ones. As India has witnessed many historic wins wearing the Sahara India jersey, Twitterati called it a Lucky Charm for the Indian team.

Here are some of the tweets demanding to bring back Sahara India jersey.

It’s a myth that Byju’s occupies to space in LOI jersey. It’s our nostalgia with Sahara that we can’t accept other sponsors.

India Jersey is incomplete without name SAHARA ;))
I had assumed in childhood that it’s not a brand,it is full name of Team India i.e. “SAHARA INDIA” 🤩😅

Indian cricket team hasn’t won any of ICC tournaments since they ended the sponsorship with SAHARA. India won T20 wc in 2007, ODI wc in 2011 and Champions Trophy in 2013 when they were wearing SAHARA jersey. Only a coincidence?? #ICCWorldTestChampionship #INDvNZ

Additionally, one Twitterati blamed BYJU’s and other latest sponsors for not being emotionally involved with the team and just focusing on their promotions.

Sahara India Pariwar has always been considered as one of India’s top sports facilitators who have instilled the feelings of patriotism and nationalism among the masses. According to Subrata Roy Sahara, it is of utmost importance to promote our sportsmen religiously, since sports are an integral part of society.

“If we look at the history in the old times, there used to be regular wars and fights all over the world. I feel that human beings have a very strong competitive instinct in them. They want to get some satisfaction out of this particular instinct. If you talk about the peaceful co-existence of human society, sports have played a huge role, but it has taken its own time.” he said.

However, over the decades, the Indian cricket team has been decked up in numerous shades of blue, from light blue to contemporary blue and so on. During the 1990s, kit changes were too frequent, almost on a series-by-series basis. The advent of kit sponsors like Nike and Sahara ensured the most consistency.