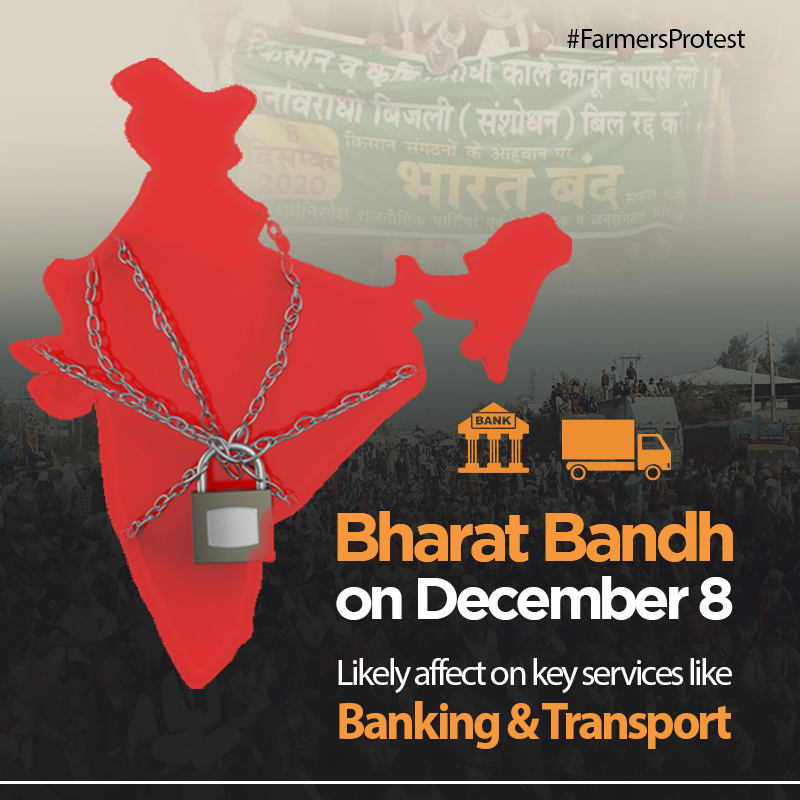 Against the backdrop of the contentious agriculture bill passed by the Centre, farmers’ unions have called for ‘Bharat Bandh’, a nationwide closure, from 11 AM-3 PM Tomorrow i.e. on December 8, 2020. While the centre has offered to amend the laws during the fifth round of talks on December 5, it failed to cut ice with the farmers. Another meeting between the centre and farmers’ leaders is scheduled for December 6.

The nationwide strike call is farmers’ bid to demand the government to repeal the farm laws passed in both parliament houses and various political parties have also stepped up in support of farmers on this. Congress general secretary, KC Venugopal said, “With regard to the ‘Bharat Bandh’ on December 8, all PCCs have been asked to extend their support to the bandh, related activities and demonstrations in their respective states and UTs.” Other parties that have also extended their support include DMK, MNM, Shiv Sena NCP, AAP and TMC. A joint forum of ten central trade unions has also offered support towards the Bharat Bandh call.

The ‘Bandh’ is likely to start as early as 8 am with road blockades in force up to 3 pm across the country. Bhartiya Kisan Union leader Rakesh Tikait said that the farmer union does not, in any way, wants to cause problems for common man.

Arvind Kejriwal is among the several opposition leaders who have extended support for “Bharat Bandh”, which has been called by the thousands of farmers protesting against the centre’s contentious new farm laws.

Services that may or may not get affected: