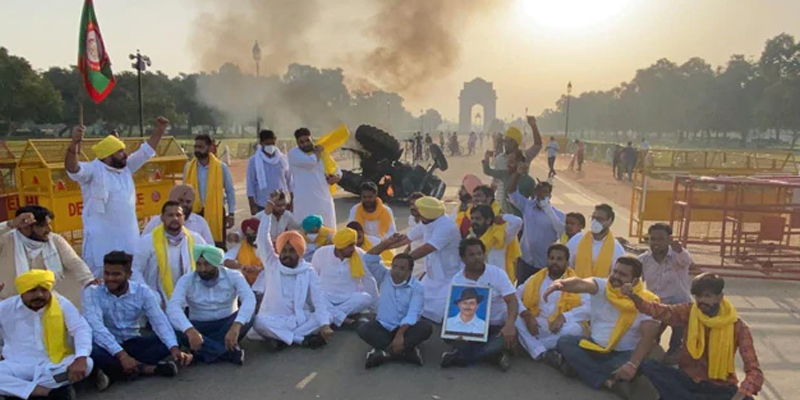 Following the recent controversies concerning the Farm Bill, people have come together to protest against it that is said to impact the farmers negatively. On Monday, i.e., 27th September’20, a group of protestors gathered around India Gate, Delhi and set a tractor on fire.

The fire, however, has been put out by the police while the tractor has been removed by the fire department. The protests started soon after President of India Mr. Ram Nath Kovind, assented to the three bills passed in parliament on Sunday. Punjab and Haryana were among the two states where the initial protests began.

Reportedly, approximately 15 to 20 protestors gathered at India Gate at 7:30 AM and set a tractor on fire. According to the police officials, the protestors were citing pro-congress slogans and the police is yet to identify those involved.

The morning protest was streamed live on Facebook by The Punjab Youth Congress on its official FB handle. The party’s workers had allegedly attempted to set a tractor on fire in Ambala on 20th September’20.

“Congress workers brought a tractor on a truck and set it on fire near India Gate. This is the drama of the Congress. This is why people voted the Congress out of power,” Union Minister Prakash Javadekar tweeted in Hindi.