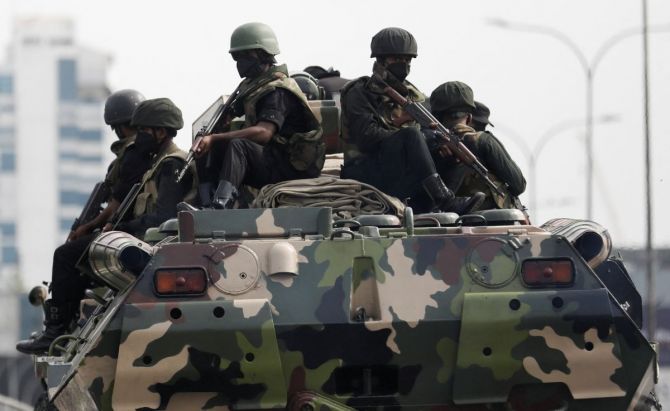 Globalization has made it impossible for countries to stay unaffected by events that unfold daily. The island nation of Sri Lanka is delving into chaos as it struggles to contain an economic meltdown. India has been playing the role of a big brother and offered a good deal of support without the desired effect.

The situation reached critical levels as social media platforms were rife with rumours that former Prime Minister Mahinda Rajapaksa and his family members have fled to India. The Indian High Commission in Colombo was quick to refute such claims as “fake and blatantly false”. Just a day later, the mission had another issue on its hands.

There were speculative reports that New Delhi was considering sending troops to quell the situation in Sri Lanka as paramilitary forces clashed with protestors. The High Commission categorically dismissed all speculative media reports and instead reiterated that India was fully supportive of Sri Lanka’s democracy, stability and economic recovery.

The mission took to Twitter to address the reports. The tweet read, “The High Commission would like to categorically deny speculative reports in sections of media and social media about India sending her troops to Sri Lanka. These reports and such views are also not in keeping with the position of the Government of India.”

Mahinda Rajapaksa resigned as Sri Lanka’s Prime Minister as economic turmoil gripped the nation, sending it down the rabbit hole. His supporters had clashed with anti-government supporters prompting him to step down from his position. His whereabouts are subjected to speculation since his resignation on Monday with a majority believing that he had gone into hiding in India.

Reports about Indian troops setting foot in Colombo brings back nasty memories of the Indian Peace Keeping Force (IPKF) that conducted peace-keeping operations on the island between 1987 and 1990. The mission failed to achieve its objective and the consequent withdrawal of troops will be fresh in New Delhi’s mind and is something it will be keen to avoid.