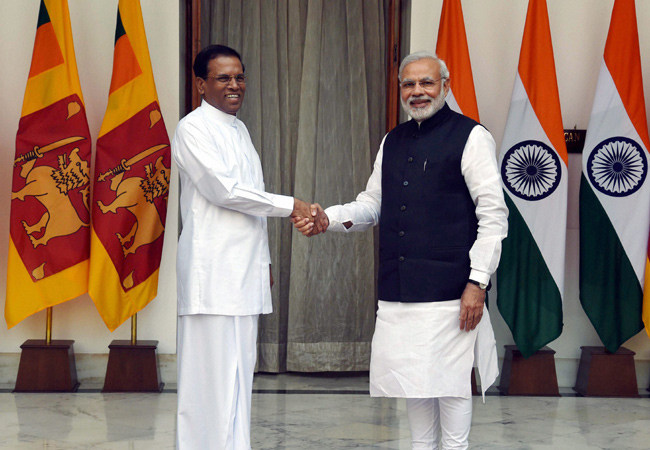 Prime Minister Narendra Modi rounded off his two-day trip to Sri Lanka and returned to Delhi on Friday. It is being speculated that PM Modi had a powerful impact on the relationship between India and Sri Lanka, since his visit coincided with the Buddhist festival of Vesak Day, which commemorates the life and enlightenment of Lord Buddha. This might put the Sinhalese community at some ease, which has always had doubts about India’s intentions.

The Prime Minister’s visit – his second to Sri Lanka since he came to power in 2014 – is being largely interpreted as India’s attempt to subdue the increasing Chinese influence in the island nation, which drifted towards China under the rule of former President Mahinda Rajapaksa.

Since India shares a strained diplomatic relation with China, the silent quest for more power over the subcontinent on the part of both India and China continues to prevail. With Pakistan under its wings, China currently enjoys a favorable position, which could further be elevated if the country’s influence in Sri Lanka continues to increase.

Sri Lanka’s President Maithripala Sirisena came to power in January 2015, after his promises of re-forging relationships with India and loosening up ties with China. After being elected as the President, Sirisena halted all the infrastructural projects that were being funded by China.

At a Buddhist conference in Colombo, PM Narendra Modi stated, “I believe we are at a moment of great opportunity in our ties with Sri Lanka – an opportunity to achieve a quantum jump in our partnership across different fields.”

PM Modi also spoke of the “indivisible ties” between India and its southern neighbor and India’s commitment to their “Sri Lankan brothers and sisters”.

“We will continue to invest in driving positive change and economic growth to deepen our development co-operation,” Narendra Modi stated.

He inaugurated an India-gifted hospital in the tea plantation district of Nuwara Eliya, and addressed tens of thousands of plantation workers of Indian origin. “It is a tremendous honor to be the first Indian Prime Minister ever to visit this beautiful region of Sri Lanka,” the PM said.

Modi impact in Sri Lanka has started sending ripples across the international front. Sources state that Sri Lanka has refused China’s request to dock one of its submarines in Colombo. This has sent a jolt to China’s naval ambitions in the island nation.