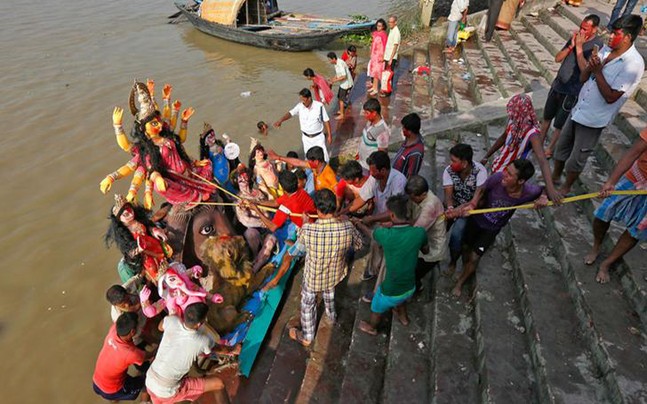 The Durga Puja-Muharram controversy has taken the state of West Bengal by storm. The statement of Mamata Banerjee-led government prohibiting Durga idol immersion between September 30 and October 1 on account of Muharram triggered a massive controversy.

Clearing the air and defending her decision, CM Mamata Banerjee said, “We have been handling Durga Puja and Muharram together for last five years and every time my government maintained peace and harmony. But for the last few years, some political parties are trying to play dirty politics over this. They are conspiring against Bengal and spreading misinformation. I am being blamed for appeasement politics. But I am not doing it for any religion, but for people. I have never said that Visarjan will not take place on Dashami. We repeatedly said that Visarjan will not be allowed only on October 1, and Visarjan can take place on September 30, October 2, 3 and 4. But some forces are trying to instigate people by spreading lies.”

She further commented on the controversy of appeasing a particular community. “People are drawing unreasonable examples. They are trying to compare with Mumbai Police. In Mumbai, around 10 per cent Muslims live, in Bihar around 11 per cent and in Uttar Pradesh also, around 19 per cent Muslims live. In Bengal, we have a population of 30 per cent Muslims. I have not created them. Since Independence, we all are living here together. After partition, people from both sides mixed and lived here. They are also citizens of this country. Moreover, one should look at the nature of these two events. Durga Puja is our major festival, while Muhharam is a day of mourning. So, we have to take some administrative measures,” Banerjee added.

However, the decision of Mamata Banerjee-led government has been highly condemned by the Bharatiya Janata Party (BJP). Dilip Ghosh, State president of BJP, said, “The state government is trying to disrupt Durga idol immersion. Last year, there was a similar directive on account of Muharram. This year also, the Chief Minister has done the same. This is being done for Muslim appeasement and vote bank politics.”

Sanjay Dalmia, leading industrialist and philanthropist took a stand for the devotees of Goddess Durga. “The people of West Bengal should immerse the idol of Goddess Durga according to their ritual, regardless of anyone issuing permission or not. Maa Durga is with her devotees,” he tweeted.

While everyone hopes for peace and harmony on such an ebullient occasion, only time will tell the final decision.